If you are interested in being a VENDOR or VOLUNTEER please let the SFPS Event Committee know!

The 38th Show & Sale of the South Florida Palm Society is this weekend!!! 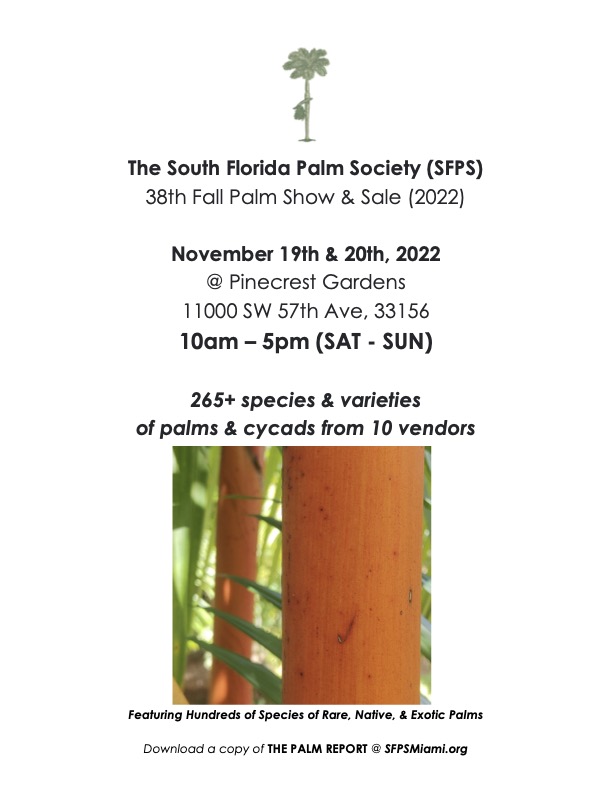 A LITTLE HISTORY ON THE PALM SOCIETY & PALM SHOWS IN MIAMI

This year (2022) the International Palm Society (IPS) celebrates its 67th anniversary. It is now a far-flung organization, with affiliate societies active around the world, but it was founded here in Florida. Dent Smith, an oil field worker turned investment house wizard, retired young to Daytona Beach, Florida, where, single-handedly, he created The Palm Society as a conduit for sharing his obsession with the stately plants.

From its beginning in 1955, the Palm Society has had strong links to Fairchild Tropical Botanic Garden. Among its first directors was Mrs. Marian Fairchild, widow of Dr. David Fairchild, the Garden’s namesake.

Another of the Palm Society’s early members, Lucita Wait, was longtime coeditor of the Fairchild Garden Bulletin alongside some notable writers such as Marjory Stoneman Douglas. Of the first 10 founding members of the Palm Society, the last one surviving was Stanley Kiem (1929-2020), who for many years was superintendent of the Garden. Not surprisingly, over time many palm enthusiasts have belonged to both the Society and the Garden.

A movie theater parking lot was the site of the initial Palm Society sale in Miami in the mid-1970s. As interest in palms burgeoned, a better sale venue was warranted. Accordingly, in 1979 Fairchild Tropical Garden hosted the first Fall Show and Sale of the Palm Society, with plants arrayed on tables just outside the Nell Montgomery Garden House. The next year, more space and less sun was needed, and the event’s location within Fairchild Tropical Garden was moved to the Montgomery Palmetum.